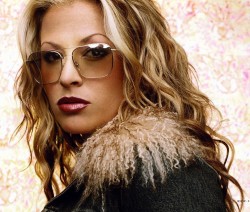 According to The Sun, the breast cancer survivor was reduced to tears by an audi­tionee who dedicated a song to his cancer-stricken nan.

"You made this whole audition very special," she told the chap before going up on stage for a chat with him and his Grandma, which is nice.

Lightening the mood, the 'Yo Trippin'' hitmaker reportedly had a look under a gentleman's kilt later on. "He had nothing on under there! I love Scotland," she declared after the pantsless audi­tionee chal­lenged Anastacia to come up and have a look at his penis. Charli XCX has previewed a new song called 'You're The One'