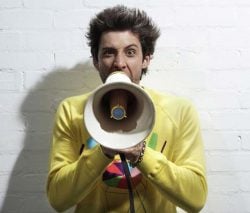 A leaky roof forced Example to cancel a 'gig' in Swindon shortly before he was due to go on stage last night.

The Swindon Advertiser reports that 3000 fans were left waiting outside while repair crews worked to mend a hole in the roof of the pres­ti­gi­ous Swindon Oasis Centre. Example let down his fans on Twitter saying, "tonight's gig is cancelled. Huge apologies. The venue won't let us play as there is a hole in the roof and it's stormy".

According to the Swindon Advertiser, he spent "about an hour", meeting fans outside, signing auto­graphs and apo­lo­gising for the can­cel­la­tion. He promised, "soon as I have news on the res­chedul­ing will let you know. Huge apologies to everyone waiting in the rain. Nothing I can do".

Robyn is surprised about numerous things