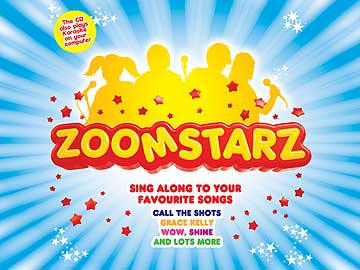 So the answer to our 'WHAT THE HELL IS THIS???' question earlier today is Zoomstarz, a new com­pil­a­tion album Universal are putting out featuring children singing the hits of today. The official site — featuring the TV ad — is here. Depending on your age and geography you might think this is a Mini Pops revival.

…but that in itself is a response to the success of the American Kidzbop com­pil­a­tion series.

In the States Kidzbop has been going for seven years and is something of a phe­nomenon — it's already on its 14th album (which features hits like 'Bleeding Love', '4 Minutes' and 'Stop & Stare') and has also spawned a range of spinoff albums, plus a whole array of shit including DVDs, books, karaoke sets and a nation­wide tour.

It'll be inter­est­ing to see how this is received over here. In America the tradition of singing kids and child beauty pageants is far stronger — over here, where we have an unhealthy obsession with funny old men, people find such things a little uneasy.

(Don't click that link if you haven't yet got around to seeing Little Miss Sunshine.)