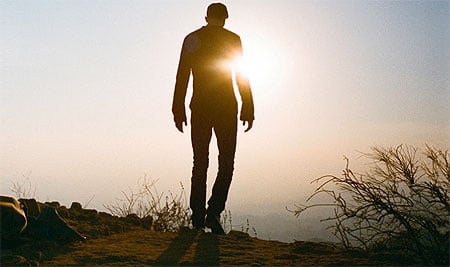 Don't worry readers, Young Love hasn't had a chunk bitten out of him by a flying shark, that's simply a pho­to­graphic illusion. RELAX.

Now then — Young Love's last album was all sorts of incred­ible* and he's got a new one coming out in a matter of weeks. The album's called 'One Of Us'. As you can hear from the bits of it on Young Love's MySpace it is shaping up to be VERY MUCH ABOVE AVERAGE. Spin Magazine have given the album two and a half stars out of five. We're not sure what that means in the grand scheme of things but if you visit their review you can download a good song called 'Black Boots'. (If you download it and listen to it don't give up thirty seconds in like we almost did because the songs ends up being really good.)

That is all we are going to say about the whole 'Young Love releases second album' thing at the moment.

* It was actually about 6/10 but the good bits were really really amazing.

Popjustice is doing a night at the Camden Crawl.

You can't go wrong with a London Boys video.