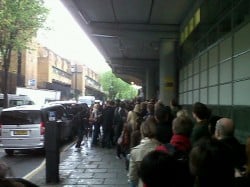 The picture to your right isn't the queue for a bank, but a line of journ­al­ists, industry types and someone from GMTV waiting in the rain to have a listen to some new Justin Bieber songs.

The excite­ment you can see is the promise of some Q&A 'action' with Justin himself. His presence meant there were about 40 fans lined up behind a railing, hurling questions at the journ­al­ists as they slowly filtered in.

At one point a girl of 16 yelled "tell Justin I'm legal", while another one accosted the man in front of us and demanded he pass on her Twitter handle to Bieber. "He missed my 16th birthday," she yelled. 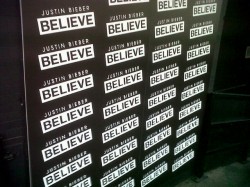 Once all bags, phones, laptops, coats and following a thorough search dignity had been left in the cloakroom, we were ushered into a big white room with chairs, tables and free wine. Amazing.

Some of the fans from outside were allowed in to have a listen and got to stand at the back, while everyone else took a seat.

Our 'compere' for the evening was Reggie Yates, who bounded on stage with all the enthu­si­asm of someone who'd much rather be doing something else. He intro­duced Justin who looked rather dashing in a black and white baseball jacket. Justin talked to the "fans" for a bit and then we were ready. The lights dimmed, some new ser­i­ous­face (he's an adult now, etc etc) pictures of Justin were projected onto the wall behind him and Scooter Braun pressed play on his iTunes.

We made a lot of notes in our Justin Bieber 'Believe' branded notebook, but here are the key facts in list form.

On the whole, well done Justin.

Britney Spears is "in talks" about a Vegas residency

Will The Saturdays ever top this?