We went to see pop concerts by two artists with the word 'love' in their names last night, so here is a spurious post in which both 'love' artists are discussed.

Our first stop was Ali Love. As you know we think Ali Love is amazing and his album is one of our favour­ites of 2007, although we don't like 'K‑Hole' because it is shit. The proper pop songs on the album are great. Here is a picture of the concert. 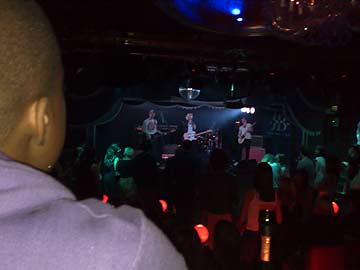 The point of this showcase gig thing was for 'the media' to be able to go along and be impressed by how amazing Ali Love is. However, we went along even though we ALREADY KNEW we liked his album, but drank the free booze anyway. So there you go, 'the music industry' — who's wearing the trousers now, eh?

Ali Love did some songs from his album and a version of the Chemical Brothers track he did some singing on. We made an amazing video of this but YouTube's playing silly buggers today so you will have to imagine it. 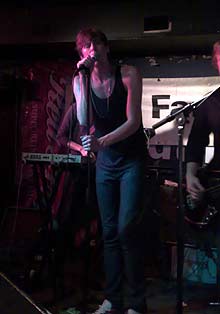 We didn't even know Young Love was in the country let alone doing a gig until we dis­covered details of his gig by accident.

Steve Lamacq was there — amazing.

His key­board­ist looked like Elijah Wood but with big hair — also amazing.

Young Love did some songs from his album but he did not do a version of the Chemical Brothers song because he had literally nothing to do with it so it would have been a bit odd.

You get what you pay for