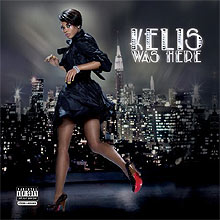 Well, it goes on a bit, we can tell you that.

Obviously the first instinct of anyone sane is to flick straight to the Max Martin / Dr Luke col­lab­or­a­tion 'I Don't Think So'.

It is basically an urban glam song. It sounds a bit like a demo. But it does have the following lyrics.

"You think you might have a chance — I don't think so!

You're telling me to be nice — I don't think so!

You wanna get in my pants — I don't think so!

Other good bits on the album are 'Weekend' (a brilliant little under­stated electro-ish number), 'Lil Star' (the Cee-Lo col­lab­or­a­tion, probably the best track on the album), 'What's That Right There' (which sounds like a better version of 'My Humps'), and 'Blindfold Me' (which is pleas­ingly mental, although sadly not about pinning tails on donkeys).

There is not enough shouting.