Hello! In theory you should only be seeing this if you're using a mobile or tablet. How's the site looking? If anything's wonky click here and tell us so we can fix it. Thanks! x
Let's have a look. 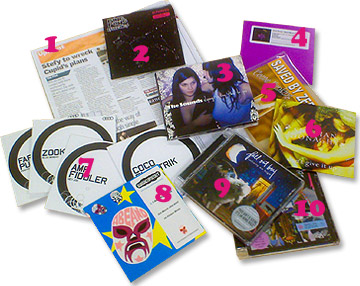 1. The new Music Week, with a thing about Stefy releasing 'Chelsea' as an 'anti-Valentine's' anthem and hoping their appear­ance at Popjustice Live will "help mobilise the potential gay audience". So if you are poten­tially gay you should buy tickets now.

3. A copy of new/old The Sounds album. There are too few nipples on album sleeves these days, wouldn't you say?

4. The new Good Shoes single. This will be going on the stereo later and we are very excited about that.

5. Possibly the worst album, album title and album sleeve of 2007: 'Come Funking' by Saved By Zero.

6. A promo of the Siobhan Donaghy single. Still quite good.

7. Some samples of the Remastered Records series. It's a col­lab­or­a­tion between various artists and Audi (!?!). Highlights are a spooky acoustic version of 'Blue Monday' by Zook and a REALLY AMAZING cover of 'Tainted Love' by the very pleasant Coco Electrik, which you can hear at their MySpace.

10. The Klaxons album which was on our desk and acci­dent­ally ended up in this pho­to­graph in spite of the fact that it's been knocking around for ages.

NB: There is a woeful lack of spurious, costly and ulti­mately pointless pro­mo­tional tattery in this pile and while we appre­ci­ate that 'times are tight' in the music industry we expect something along the lines of the following:

» Mobiles to hang from the ceiling.