This is something seen a lot recently by sub­scribers to 'Virgin Media', the better-than-Sky-but-with-rubbish-interface digital TV service thing. 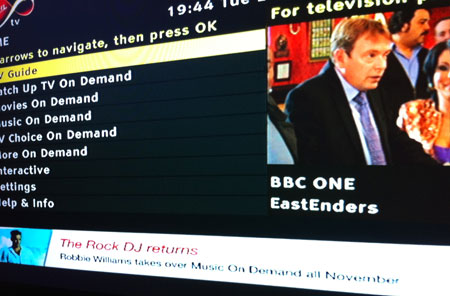 The important bit is the strip along the bottom. It's not sig­ni­fic­ant because of the number of meetings and emails that were probably involved in securing this ulti­mately quite under­whelm­ing Robbie Williams November 'takeover' (we are not certain that the most inter­est­ing Robbie Williams stuff this month is anything to do with his solo career), but it's sig­ni­fic­ant because of the phrase 'The Rock DJ returns'.

We admire the con­fid­ence with which they've used the phrase 'The Rock DJ' to describe Robbie, as if it is as much a part of the language as 'The Material Girl' with regards to Madonna, or 'The Thin White Duke' for Bowie. But it is not. To the best of our knowledge it has never been used before and it will, almost certainly, never be used again. It is horrible.

Top 10 Names One Could But Never Will Give Robbie Williams
1. The Angel
2. The Not Regretter
3. The Strong Man
4. The Someone Stupid
5. The Kid With Kylie Minogue
6. The Sin Sin Sinner
7. The Body
8. The Rudebox
9. The He's Madonna
10. The Feeler

Well that wasn't very funny was it.