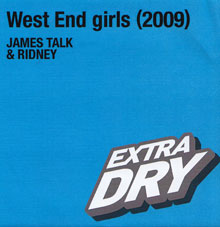 There is a version of Pet Shop Boys' 'West End Girls' coming out towards the end of September.

It's by James Talk & Ridney and it's a monu­mental slab of feelgood house currently firing up dance­floors here and in Ibiza, and has just been made an Essential New Tune by Pete oh God this is what it feels like to write about music with one eye on a press release, just blindly copying down what's in front of them, how on Earth do people do this for a living without just going mad, let's just listen to the song on YouTube.

Unless we've missed something about this new version on of the track it's basically not very good but feel free to set us straight.

Interestingly, the press release bills the song as 'West End girls 2009' — note the lower case 'g' — and stip­u­lates "Track title must be published in this format". The penalty for pub­lish­ing the title in any other format — perhaps with an upper case 'g', or with the '2009' in brackets — is not mentioned. Perhaps it is BEING BANGED UP IN PRISON. Perhaps it would be a crime so heinous that they would bring back the death penalty. Or perhaps the penalty is nothing because actually it doesn't really matter and all that will happen is that someone at 'Extra Dry' records starts jumping up and down a bit and getting a bit boo-hoo about the whole thing before making them­selves feel better by shouting at a publicist.

Not the new Madonna video