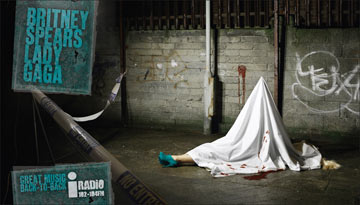 Not a year seems to pass without some sort of regional or national radio station launching an ad campaign based not on what they play but what they don't play.

It's a pretty arse-about-tit marketing tactic (why not explain why you're good rather why someone else isn't?) and there's usually some sort of 'pop is bad, real music is good' message. Here's what appears to be this year's example of that sort of campaign, courtesy of Irish station iRadio. (Link via AdWeek via BrandsBandsFans.) 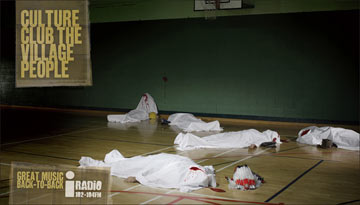 In advert­ising terms it certainly grabs attention — much like a child jumping up and down shouting "LOOK AT ME I DONE A POO" — but it's a quite badly thought through campaign because in each image one act wins out over another — so Britney kills Lady Gaga, Culture Club kill The Village People (odd subtext in that one) and Take That do away with Westlife. The message of the posters seems to be that some pop wins over (is better than) other pop. Which is true, but that's not what iRadio are trying to say. What they really want you to know is that they don't play pop. Right? 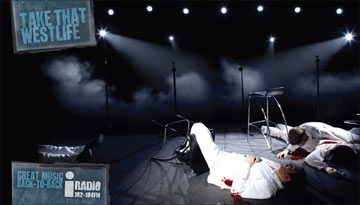 Well not really, because we're listening to iRadio online now and they've just played Lady Gaga, followed by Akon. Iyaz is on his way, appar­ently and there has been very little in the way of 'real music' in the last twenty minutes. We were really looking forward to 'going off on one' about genre snobbery but now we're just really confused. What on earth is this ad campaign trying to say?

Incidentally in case you are wondering pop is about 100 million times better than 'real music' and as proof here is the new video by The Automatic.

And here is 'Bad Romance'.

We rest our case.

The Newsdump, Jan 28, 2010: from a Boyle intrude to John & Edward's Tupac-based wish to collude