Some pop things happened this weekend. Here they are in a vertical list. 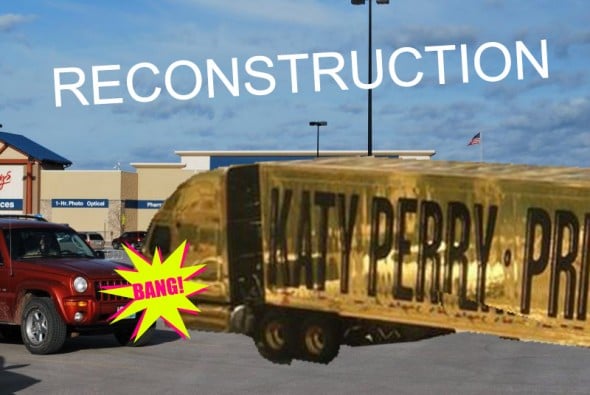 On Saturday morning pictures from last night turned up online and Katy Perry's gleaming pro­mo­tional funtruck was screwed, having been hit by a drunk driver in a Walmart parking lot (carpark). Within 15 minutes TMZ had a story up, and within fifteen seconds people were making jokes about Lady Gaga. Well done everyone.

Misha B performed to an audience of millions 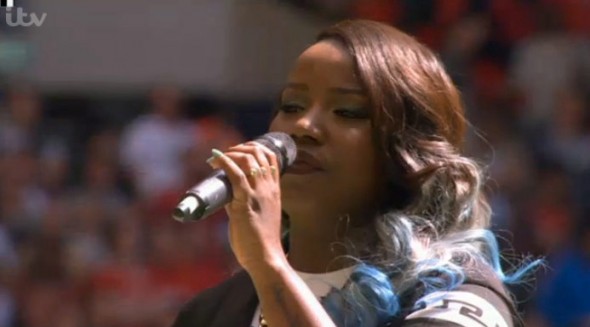 Like most of you we sat down to watch Wigan take on United in the Community Shield on Sunday afternoon little knowing that before the whole thing could quite­l­it­er­ally 'kick off' the 70,000 assembled Wembley spec­tat­ors and millions of viewers at home would first be treated to Misha B banging out the National Anthem.

Most of the reaction on Twitter was mixed (if opinions like "I love Misha B but she just BUTCHERED the National Anthem" and "Was Katherine Jenkins not available" can be con­sidered a 'mix'), but there were some satisfied customers.

Somehow this isn't on YouTube (AND THEY CALL THIS PROGRESS) but you can watch it here on ITV Player. (It's at about the 19:00 mark but there's a lot of faffing around with ads and the usual ITV Player bollocks in order to get there and to be fair it's a right old racket so if you're pushed for time we'd suggest giving it a miss.)

HE'S ONLY GONE AND DONE  A DONKED-UP DONNA SUMMER REMIX.

Giorgio has put a rip on his SoundCloud too if you don't want to see people having fun.

Jamelia was surprised by an exploding box 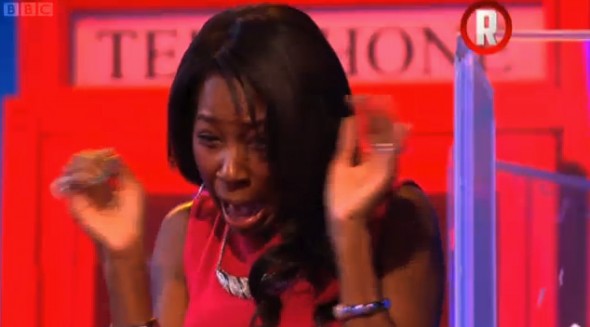 We didn't quite believe early reports regarding the new BBC One show 'I Love My Country'. We didn't believe that the whole thing could be quite as bad or quite as bizarre as we were being led to believe. So we tuned in for the second episode and between you and us readers this really wasn't a very good TV programme.

Anyway, Jamelia is the 'house singer' on the show which means that she and a group of clapped out session musicians plod their way through bits of music during the show, thus creating a 'unique party atmo­sphere'. You actually get to see Jamelia quite a lot during the show, for instance when a box explodes during a game of pass the parcel.

On Saturday she also sang some of Joe Fagin's 'That's Living Alright'. On reflec­tion this song would perhaps be better suited to a banter-friendly ladband like The Wanted  or 'Loveable Rogues' but you can listen to Jamelia's rendition at the 13:00 mark on iPlayer. It's tra­gic­ally brief. Perhaps a full length version could be Christmas Number One?

We gave it 9/10 pretty quickly — the song starts off a bit 6/10 in a Cher Lloyd album track sort of way but very quickly gets on track once the first chorus hits. The song was imme­di­ately accused of being a copy of Sara Bareilles' 'Brave'…

…which came out a few months ago and which Katy had tweeted about enjoying at the time. Over on ATRL, they started wondering whether Katy's song­writer Bonnie McKee was trying to sabotage Perry's career, before very quickly deciding that no of course she fucking wasn't what are you talking about.

Katy Perry's team have moved pretty quickly following the leak, too; it's already on sale in America. Not in the UK though obviously. It's not due out here for another month. Amazing.

Just as the planet was getting excited about the Katy Perry single, seven seconds of the new Lady Gaga single leaked, and people started talking about that instead.

It's called 'The Apple', and it's produced by Pascal Gabriel. Seriously ladies and gentlemen this is an extremely good single. Well done VV!

Unfortunately we can't embed it on Popjustice. Shame!

EQ Music Blog have a good post about this. Tell you what though, we really can't wait to write a worthless blog post about this new album of hers. We cannot wait. 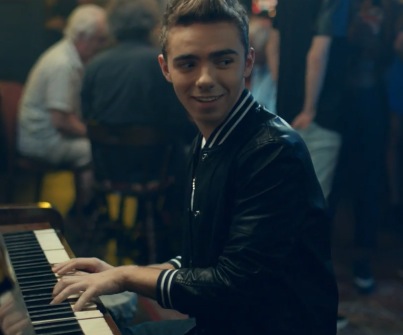 The Wanted — 'We Own The Night'