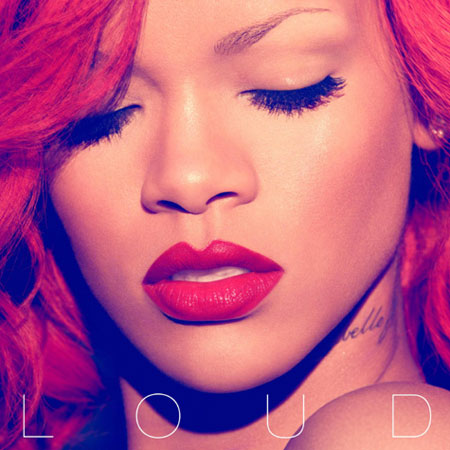 After the amazing 'frock half off in a paddock' shot on the 'Only Girl (In The World)' sleeve — and our sub­sequent, award-winning (TBC) 'Rihanna is in a field of her own' 'joke' — we were rather hoping for further meadow-based adven­tures with the 'Loud' artwork. We had loads of amazing lines ready. "She pasture best" was one. (Only applic­able if she had gone rubbish which she fairly clearly hasn't but still.) "Mead to measure" was another. (Only applic­able if she was measuring something in a field which she probably wouldn't have been but still.) Tragically the Joke Police have clearly inter­vened at Rihanna's end and insisted on album artwork closely cropped in on Rihanna's head. It is a shame the Joke Police did not think this through, as the crop has, itself, fallen right into our field-based puntrap. But it is a hollow victory. We don't hold this against the team respons­ible for this graphic but we do feel that more of an indic­a­tion of what is occurring behind and around Rihanna would be useful for fans, reviewers and other musicians. Context is all in pop music and if Rihanna is doing the ironing we need to know.