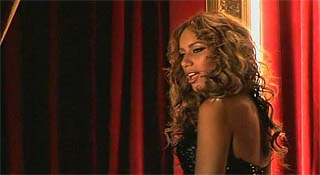 The new Leona Lewis video is directed by Sophie Muller, a video­mak­ing (sometimes) genius who is good at putting pop ladies in lovely dresses in  exotic locations.

The end result appears (from the 30-second clip you can download below) to be a lot like Leona's 'A Moment Like This' video but on a smaller stage and in a much more expensive dress. Please be aware that this is a behind the scenes clip and that the final video is not a post­mod­ern epic featuring cameramen and other 'fourth wall'-demolishing so-called 'sig­ni­fi­ers'.

Click here to watch (through a rel­at­ively simple download 'thing') Leona Lewis behind the scenes on her new video.

In exchange for the privilege of being allowed to promote Leona's next single we have been asked to point out that Leona has been nominated for a Brit Award for Best Single and you can vote for her to win it by clicking right here and not acci­dent­ally voting for Mika instead. We are sure it would be a dream come true and just so amazing and so brilliant for Leona if she was to win a Brit Award tomorrow…

The Newsdump, Feb 19 08: from Heidi Montag's money to Justin's specs that are funny