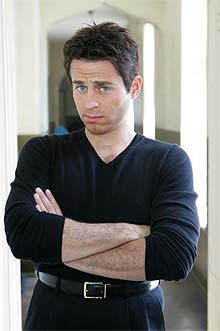 In case you are an idiot and haven't seen any of either series, you should be aware that Star Stories is Officially Very Good Indeed.

The Guardian did a thing about it on Saturday saying it's the funniest thing on TV right now and we are inclined to agree — it's kind of pop biograpy meets pantomime, with stars' stories (DO YOU SEE) dra­mat­ic­ally re-enacted by a returning cast of people you recognise from Muppet Treasure Island.

Yes, yes, we know it's on on Friday nights but let's weigh up the options.

GO OUT: Get drunk, cry, fall over.

We think that is what they call a 'no brainer'.

This week's episode (ie the one on in three days) is the best so far. It's 'SYCO Productions Presents: Simon Cowell — My Honesty, My Genius' and tells Simon's story with cameo appear­ances from Sinitta, Robson & Jerome, Dave Lee Travis, Take That, Pete Waterman, Ant & Dec and Gareth Gates. 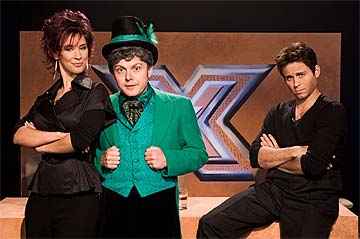 …(LOL) and a very amusing meeting of minds between Simons Cowell and Fuller.

To celebrate us running this piece without them having to fork out for an advert­ise­ment, the Star Stories bigwigs are offering you the chance to WIN A DVD PLAYER AND THREE SIGNED COPIES OF THE SERIES ONE DVD WHICH IS OUT NOW IN ALL GOOD DVD SHOPS. To enter, visit this bit of the internet…

…and watch some funny clips, then answer some videos and all that sort of thing. They've put the Popjustice logo on it and everything. Ladies and gentlemen if there was any doubt that the internet really makes dreams come true, the proof is right there.

Closing date for the com­pet­i­tion is midday on Friday (August 10). In the interests of trans­par­ency we would like to point out that WE WILL PROBABLY BE KEEPING THE DVD PLAYER OURSELVES because the one we have at home has got a DVD in it which won't come out AT ALL not even when you stick a screw­driver in the hole and waggle it around. But you will def­in­itely win some DVDs. In the meantime we will have another go at 'fixing' ('taking off the top and poking it a bit') our DVD player and we will let you know whether you might win the Star Stories one.

The chatter of Popjustice 16

Will MIA ever have a proper hit single?