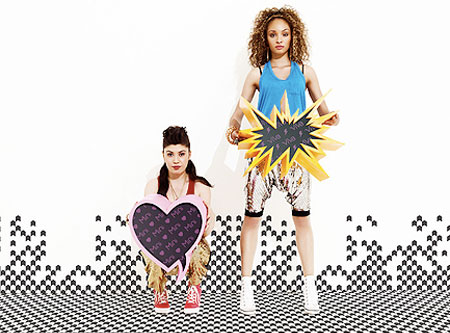 As you should by now be well aware Mini Viva are the finest pop duo who aren't Hurts or The Sound Of Arrows OF THE 21ST CENTURY.

Let's remind ourselves what the new Mini Viva single sounds like.

So they're starting a thing off today called 'Viva Mini Viva' which is certainly more along the lines of what everyone was expecting from the band when it was announced that Simon Fuller would be getting involved with the duo's career. What we're looking at here is a weekly, Friday afternoon online show in which Frankee and Britt sing songs, respond to texts and tweets and generally do anything they can to fill half an hour.

From what we can gather it's basically The 5:19 Show but not at 5:19, it's not daily and it has the same musical guest every single time but when that musical guest is Mini Viva you're at least guar­an­teed a certain level of quality. So you can tune in knowing that while the guest may never be Lady Gaga, nor will it ever be 3OH!3. We're talking 'Mini Viva as quality baseline' here.

The first broadcast of Viva Mini Viva is TODAY and it takes place at 4.30pm. When it says 'live' we're not sure if it's LIVE live (and if it's not then it becomes rather less 'appoint­ment to view') but fingers crossed for some comedic mishaps and if the upper reaches of the Sky programme guide are anything to go by they might even kiss each other if you ask nicely.

The URL is http://www.ustream.tv/vivaminiviva for the show, and it's @MINIVIVA for Twitter.

You'd have to be pretty stupid to put your new video online the day 'Telephone' appears.