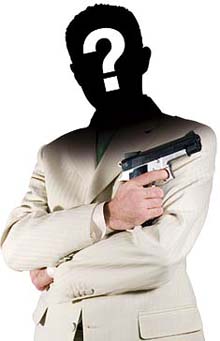 You are also not going to get shot, as the picture we have chosen to illus­trate this with may suggest…

Basically, he is very good, respons­ible for ONE OF THE GREATEST RECORDS OF ALL TIME and you have probably heard of him already. That is really all we can say. It's part of a big campaign organised by MySpace, a website you might remember from the days before Facebook ruled your every waking moment.

So if you are a singer who is not com­pletely rubbish then you should go to the MySpace page right here and become 'friends' with the project.