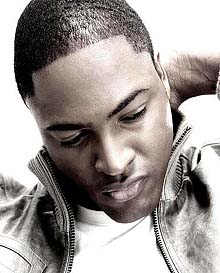 Would the world be a different place if Rihanna had never recorded 'Umbrella'? What kind of lives would we all be leading if Britney, Mary J Blige or Taio Cruz had released it instead?

Would Britney be a happier person?

Would Taio Cruz be the biggest R&B star on the planet?

We don't know and neither does Taio Cruz — he is a pop singer not a psychic. However he does know a lot about the story of 'Umbrella' and so will you when you read our interview with the latest man in music to help Luciana into the Top 40.

Other rev­el­a­tions in the interview include:

1. His record label were not keen on releasing 'Come On Girl' as a single.

3. He was not allowed to drive over 40 miles per hour while filming his new video due to a rather precious car owner on set.

4. He has been working with Esmee Denters and promises that her songs will be quite good.

5. His lawyers are better than Corinne Bailey Rae's lawyers.

Click here to read our interview with Taio Cruz.

Roisin Murphy: better than a man painted gold pretending to be a statue

The best one second of video you will see this week