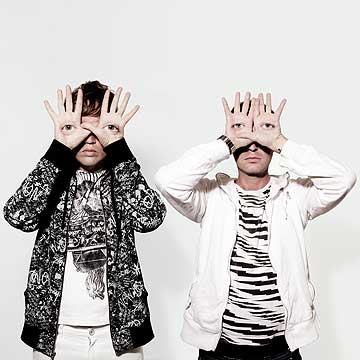 As you can tell from the exclam­a­tion mark in their name and sig­ni­fi­ers too numerous to mention in the pho­to­graph above, Pacific! are a cool band. Fortunately they also make good pop music that sounds like the Human League and the Beach Boys and sometimes a bit like the Pet Shop Boys.

Here's, 'Hot Lips' a song we had as Song Of The Day at the start of the year.

The duo's album, 'Reveries', was released on Monday and we've been listening to it about once every two days for the last few weeks. 'Number One', 'A Tree' (the next single) and 'Life Before Seven' are among our favourite tracks but you might have your own — you can hear clips of the rest of the album tracks in this thing here.