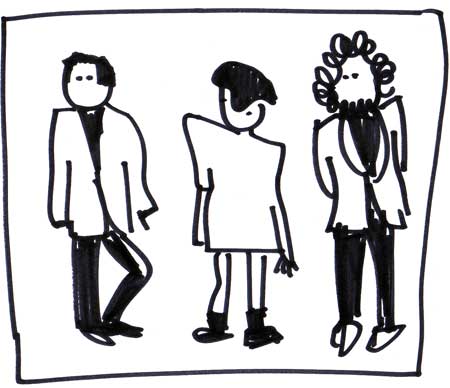 Earlier today, while we were listening to the new Noisettes single, we decided to draw a picture of the record sleeve. Impressed? Don't tell us you're not.

After we had finished our illus­tra­tion we noticed that the song was STILL GOING. For those of your who haven't yet heard 'Don't Upset The Rhythm', or for those of you who don't realise you've heard it, it's the song on this advert.

Yes, that one. Sounds quite good on the ad, doesn't it. But Jesus wept, viewers, when you've got it on the stereo it feels like time has somehow stopped. The radio edit's only 3'10", the poor fella, and it still feels like it's about ten minutes long. The CD single did not stay on for the 'album version' (an extra 38 seconds — bloody hell!) or the 'instru­mental'.


HERE ARE THE FACTS

1. Some songs should actually only be thirty seconds long.

She's not lying down, we've just put the picture sideways to see what it looks like