Hello! In theory you should only be seeing this if you're using a mobile or tablet. How's the site looking? If anything's wonky click here and tell us so we can fix it. Thanks! x
[audio:shayneclip.mp3] 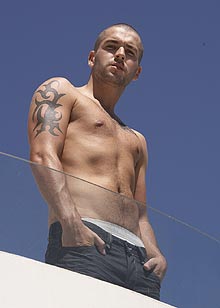 We reckon: quite good. It makes us think of Darren Hayes doing 'Pon De Replay'. On what planet in the known universe or beyond could that possibly be con­sidered a bad thing? We will tell you which planet: Planet Edith Bowman. And nobody would want to live there.

» "I'm gonna make you feel like you are Heaven on Earth, I'm gonna thank your mother just for giving you birth." In your face, 'Gallows'.

»
The line "I'll find some cold food". Everyone likes a buffet. IF this line turns out not to be about cold food and IF it's just "if that's okay with you" in a stupid voice and IF there is no buffet theme at all to this song we will be slightly dis­ap­poin­ted because buffets have for too long been absent from Top 40 pop lyricism.

» "I'm gonna wanna hold you in my arms when you cry, if that's okay with you." Possibly the behaviour of a man terrified of being accused of rape but, we like to think, simply the attitude of a very polite young man. Why aren't there any polite young men around any more? The ones who are polite are all gay. And even they're a bunch of cunts.

A few weeks ago we had an enjoyable cup of tea with Shayne at The Big BMG Building Of Doom and he played us some of his other new bits and bobs. One of the songs is REALLY REALLY PROPERLY AMAZING. One of them was a ballad but not a ballady sort of ballad. The other sort. He was also very excited about his new wardrobe, although from the looks of things (see 'I'll beat you up but apologise after­wards' shot, above) the stylist spunked everything away on Shayne's bottom half.

The single was invented by Max Martin, by the way. Well done Max.

The most boring midweek chart of all time