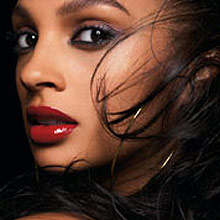 You will notice that Alesha has gone back to Number One in the week her second single got to Number 45. This is because Alesha is a world-class popstar who has, it is fair to say, been fucked by pop.

FYI we have asked Alesha's PR guru about the album. He says:

"It's been put back to next year."

It is a shame the response was so brief because if it had been a few words longer there would be some lines for us to read between. Instead you will have to draw your own conclusions.

Elsewhere in the Almighty are Shiny Toy Guns ("going up at two"), Winehouse and — despite making an album with very little in the way of 'ups and downs', All Saints, simply because it feels quite nice to have them back again, a bit like when you are in London and the Thames is full and you feel very safe. Original Cast (who we mentioned in the mailout yesterday and are VERY GOOD) also get a mention, and we would have put Eton Road in there too but we forgot.

Celebrity drink driver Javine is at the very bottom of the list for Reasons We Don't Need To Go Into Here and for something we have just seen on the internet sug­gest­ing a jaw-dropping lack of self respect — or any other quality ordin­ar­ily used to separate us from animals.