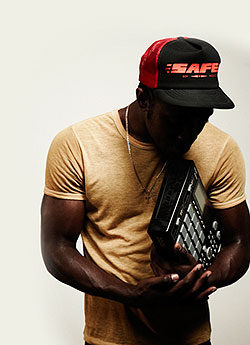 As you have no doubt already heard Kele out of Bloc Party is now Kele quite literally 'out of' Bloc Party ie he has made the decision to con­cen­trate for a while on a‑warblin' some solo tunes.

You can tell it is more in the 'Flux' area of things and that it is not Proper Indie because Kele is holding a piece of elec­trical equipment. It is useful when people do that in their photos. Indie bands should hold guitars and non-indie bands should hold things with flashing lights on them. It makes life a lot easier.

Anyway there is an album called 'The Boxer' con­tain­ing songs with titles like 'Walk Tall' and 'On The Lam' and 'The Other Side' and 'Everything You Wanted' and 'New Rules' and 'Unholy Thoughts' and 'Rise' and 'All The Things I Could Never Say' and 'Yesterday's Gone' but the first single is called 'Tenderoni' and it appeared as if by magic (quite crap magic, as practised by Ye Olde Societe Of Radio Plugeurs) on Zane Lowe's Radio 1 show last night.

Zane got quite excited.

To be fair the song is quite exciting though.

This is the song.

Well that was somewhere in the region of highly listen­able, was it not?