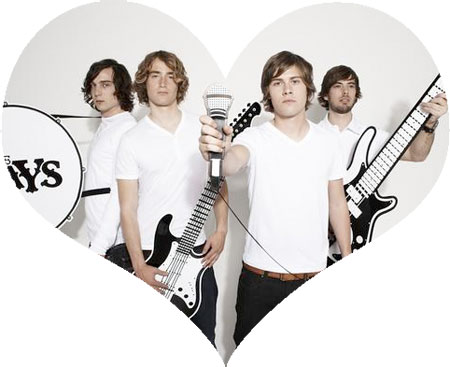 This pop band, The Days, have agreed to cover a love song — chosen by Popjustice readers — for Valentine's Day. We've picked a shortlist of five and you, the viewer, get to pick the actual winner. You can vote in the 'A Pointless Vote' thing next to the PJ Almighty.

'Love Comes Quickly', made famous by Pet Shop Boys
…which would be one of the best love songs of all time even if its only lyrics were "just when you least expect it, just what you least expect" repeated for the duration of the song.

'True Blue', made famous by Madonna
…which wasn't featured on 'The Immaculate Collection' in spite of it being one of Madonna's best songs.

'Independent Love Song', made famous by Scarlet
…which we ended up listening to on Spotify a few weeks ago. "We're surprised nobody has covered this yet," we thought. Could this all be about to change?

'I Want It That Way', made famous by Backstreet Boys
…which is one of the best boyband ballads in the history of young men sitting on stools.

'With Every Heartbeat', made famous by Robyn featuring Kleerup
…which is The Official Sound Of Sadness :(.

We think the vote will last for about 24 hours or so, so get voting and the plan is for The Days to do the cover and chuck it online on Valentine's Day.

In the meantime we have two points to make:

1. As it happens we went to see The Days LIVE IN CONCERT last night. They are sort of halfway between McFly and The Feeling (but not in the same way that Palladium were), the first three sons they performed were GREAT and the whole thing was unex­pec­tedly brilliant.

The singer is wearing a tie in one of the scenes. FAIL.

This is not actually the new Pet Shop Boys video