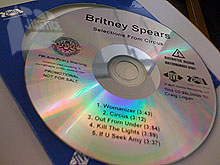 …contained tracks from Britney's 'Circus' album, although we think they've all leaked now so there's not much point in saying very much about them.

So this is just to let you know that it was Britney in case you were hoping for a new Steps album or something.

Do you think this album will do better than 'Blackout'? We thought 'Blackout' was great but everyone was a bit too concerned about Britney being mental to give it a proper listen. Perhaps now she is fit again people will give this new album more attention.

Alesha Dixon — The Boy Does Nothing