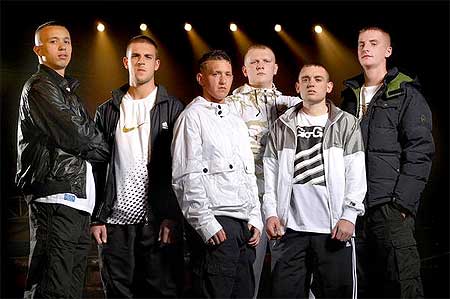 Millions of years after the human race as we know it has died out, future civilsa­tions will unravel the com­plex­it­ies of 21st century human existence by examining the popular culture of the day and, at the heart of their studies, will be the simple folk songs which document the everyday life we al currently take for granted. And when those future his­tor­i­ans blow the dust off an old Nokia, excavated from the fos­sil­ised back seat of what remains of a Number 345 London bus, they will hear this song, and they will know everything.

That's only 50 seconds but as the song develops it continues to blossom, like a donkpop version of Girls Aloud's 'Biology'. It is, in many ways, Blackout Crew's 'Stairway To Heaven', a modern cellphone symphony that holds a mirror up to society. If you do not like this song, you do not like truth.

1. The 50 seconds above are better than the entire new U2 album*.

2. Yes we know this isn't the first song with a ringtone in it (there's this one) (and this terrible effort) but 'Dialled' is certainly the best.

3. When Popjustice's Twitter followers read us talking about what was poten­tially the most post­mod­ern ringtone of all time (or something), this is what we were talking about.

4. "I've got feelings of anxiety, me" will end 2009 as one of the year's greatest lyrical milestones.

5. This is the way the world will end; not with a bang, but a donk and a ringtone.

6.
We can tell you right now that the video is going to be amazing.

So there you go. You can hear the whole thing over at Blackout Crew's MySpace, although someone — in classic Blackout fashion — has posted annoying autostart video clips in the comments at the bottom of the page, so you'll need to turn those off before you listen to the track.

* We have not heard the new U2 album but this is an educated guess based on the assump­tion that the new U2 album does not have a donk on it. If the new U2 album does in fact turn out to contain traces of donk it is possible that it may be as good as or even slightly better than the 50-second Blackout Crew clip featured above but the chances are still slim, par­tic­u­larly as Record Of The Day, the music industry bible that isn't Music Week, tweeted this from the U2 album playback yesterday evening.

You won't need a 2:1 in Media Studies to deconstruct this video's complex semiotics

Kelly Clarkson — My Life Would Suck Without You