Last night on The Big Reunion, the six groups got back together and began rehears­als in earnest as the deadline for their London comeback show loomed ever closer. There were tears, bum-notes and recrim­in­a­tions aplenty.

But I have something much more exciting to write about…

A couple of weeks ago I wrote a thing about how Abs/z from Five is by far the best and most watchable element of the show. It ended up going a bit ‘viral’, to use the modern parlance, proving that I wasn’t the only one who had fallen head over heels for the 'Stop Sign' hitmaker's bizarre life stories and inim­it­able pearls of wisdom.

Shortly after the article went online, I received a message from his girl­friend Vicky — once of early 00s pop trio Smoke2Seven – who revealed that the man himself had been made aware of my humble tribute. Not only that, but he was so touched that he had decided to send me a gift. Needless to say, I was equal parts excited and terrified.

Days passed and nothing arrived. I figured Abs/z and Vicky’s message had been at best a passing fancy and at worst a cruel joke. UNTIL YESTERDAY, when I received an artfully duct-taped box in the mail, con­tain­ing nothing less than the iconic Rainbow Unicorn Hat! I have literally never been happier.

To me, this is a classic example of why Abs/z is the star of The Big Reunion. Shows like this are often set up to make it easy to laugh at the arrogance and delusions of faded stars, but it would take a cold heart indeed not to warm to Abs/z.

His warmth, boundless enthu­si­asm and total lack of pre­ten­sion shine through in his every appear­ance onscreen – he can only be who he is, and who he is, is amazing. And, it tran­spires, very generous with his headwear.

The Unicorn hat had a starring role in last night’s show, as it right­fully took pride of place through­out his dance rehears­als – to the extent that I feel a little bit guilty about claiming it before the Arena tour begins.

Anyway, if you're inter­ested, other high­lights of the show included:

Next week, more rehears­als, even more Five/Four drama and a SHOCK PLOT TWIST as Blue gatecrash the tour at the last minute, for no apparent reason and despite having been tech­nic­ally reunited for years.

"I really don’t want to bow down to the altar of Blue," moans Kevin from Liberty X. It is a worry… 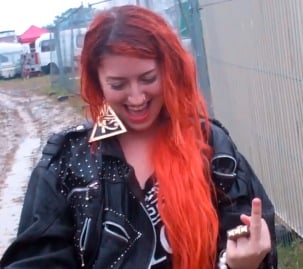