So here's what happened on Saturday morning: at the precise moment when 85% of the people who regularly moan about how Top Of The Pops should come back were queuing up to buy some old bollocks on Record Store Day, the BBC screened the first episode of The Playlist, a brand new chart-based music TV show.

The Playlist goes out on CBBC and seems to replace CBBC's exper­i­ment with the Official Chart Show, which ran from 2015 until this February. It's also filling a gap left by Friday Download, the fairly decent music show that ran for nine series and existed below the radar of everyone outside its precise target demo­graphic. Obviously nobody downloads anything now and it's all about playlists, so here we are. (You can watch episode one of The Playlist over on iPlayer.)

You need to go into this knowing that Playlist has been knocked together for somewhere in the region of eight quid, which is either the reason it's on CBBC or the result of it being on CBBC, or both, or a com­bin­a­tion of those factors. Either way, as has always been the way with music shows, the resources thrown at The Playlist have defined the access they'll get to artists.

The first episode's musical guests — and hosts — are Pixie Lott and Anton Powers.

During the show Pixie and Anton interact with a 'voiceover man' who isn't credited, but he sounds exactly like BBC disc jockey Scott Mills and therefore is almost certainly Scott Mills. Pixie explains that The Playlist is "the only place you can control what you hear and see", which would have been a bold claim ten years ago and sounds com­pletely batshit in 2017.

To kick things off, Pixie and Anton get a little X Factor-style intro package, which is nice for them.

The meat and veg of the Playlist is that during the week, CBBC website visitors have been voting for their favourite songs from a selection of current tunes. The Top 3 are then played on The Playlist.

One of the strange things about The Playlist is that it seems to have been recorded before the results of the vote have been counted, so you get Pixie and Anton intro­du­cing the third most popular song without saying what it is, then you get Scott Mills coming on and saying it's Anne-Marie's ‘Ciao Adios’, and then it cuts back to the studio where you get Anton's thoughts on the selection: “Loving this one”.

We then get about ninety seconds of 'Ciao Adios', complete with on-screen facts.

We are calling absolute bullshit on that horse claim. Please forward all photos of Anne-Marie on horseback to the usual address, this is exactly the sort of fake news the BBC should be avoiding at all costs in the current political climate.

Without ref­er­en­cing the track they've just played, Pixie and Anton — who it has to be said are doing their best with this slightly strange format and atmo­sphere-free studio — go into what will appar­ently be a regular segment. It's called Sorry Not Sorry, except it's actually called #sorry­not­sorry for reasons per­tain­ing to relat­ab­il­ity and young people and that appar­ently being the only language some people under­stand. There's a short blast of Justin Bieber's 'Sorry' because it's got the word 'sorry' in it.

Sorry Not Sorry (sorry, #sorry­not­sorry) seems to be about the hosts explain­ing what they are sorry, but not actually sorry, about. Pixie Lott is angry about when she asks people questions and they give answers they’re not sure of. Anton is very upset when he's driving and lets someone through but they don't respond with a driver's wave, even though Rule 160 of the Highway Code clearly states that motorists must "drive with both hands on the wheel where possible".

After #sorry­not­sorry Pixie and Anton move on to the second most-voted song in this week's playlist. “Let’s find out who you voted for as your second choice," Pixie announces. It cuts to Scott Mills, who announces that it's Clean Bandit and Zara Larsson's 'Symphony', then back to the studio. “Ah," Pixie says, "I love this choice.”

CBBC don't show the bit in the video with the dead man, which is fair enough, but they do show Homosexual Frolicking, which is quite good isn't it?

Next up, Pixie and Anton go over to Greg James, who's in his studio at Radio 1. Greg is the host of the Radio 1's Top 40 show, or what remains of it, and there's some relatable and snappy chat about filters ("we love your filter”, “what’s your favourite filter then”, etc etc).

After this Greg counts down the UK Top 10 and throws in some facts and stats. Greg talks about how many views the Zedd video has, how this new song is Martin Jensen’s biggest hit to date, how Kendrick’s got twelve songs in the chart, how Drake has the album with the record for most streams in one day and so on. Things are going quite well until it gets to Harry Styles, who hasn't released a video for his single, so they just show that photo of Harry in the birthing pool.

When Greg gets to the Official Chart's Number 2 — which is Clean Bandit and Zara Larsson — it kind of shows the arse of The Playlist's format, in the sense that the second most popular song according to CBBC's website visitors is also the second most popular choice people who just generally listen to music. And if you're talking about voting for how much you like a song, isn't 'listening to it' quite a good way of counting votes? Obviously The Playlist will skew young — and each week's Top 3 will always be based on the ten songs selected for inclusion — but having a chart countdown in the middle of another countdown doesn't quite work, espe­cially when The Playlist only runs for fifteen minutes.

"What a great chart!" announces Anton Powers, making no reference to any of the songs actually in it. When asked for her current favourite song, Pixie Lott decides that it's the one she's made with Anton Powers.

Now it's onto another regular feature, which is called Hotline Tings. Its title isn't hashtagged.

Hotline Tings is all about tele­phones. Anton asks to see the last photo on Pixie's phone. Pixie chooses one her makeup artist took of Pixie and Anton. The last person Pixie called, meanwhile, was Caroline, her makeup artist. The last song Pixie played was the one she's made with Anton Powers.

Then it's back to The Playlist's countdown, and we're about to find out which song viewers have been voting for as their favourite of the week. Pixie and Anton make a really big deal of this reveal — there's even a gold envelope. (Anton has been sitting on the envelope and when he hands it to Pixie he makes a joke about the envelope smelling, which feels like a bit much for a Saturday morning.)

There's a moment when Pixie is dra­mat­ic­ally undoing the envelope where you think, hold on, they've gone through the whole show without announ­cing or back-announ­cing any of the specific songs, how are they going to get around it? There's even a drumroll.

"And the winner is…" Pixie double takes. "Oh, now that is a good one." But what is it, Pixie? Cut to Scott Mills: it's Ed Sheeran's 'Galway Girl' (which we last heard about three minutes ago as part of Greg James' chart countdown).

They play some of the song, after which something really weird happens: Pixie doesn't mention which actual song won the vote, but after about thirty seconds of chat Pixie — rather than Voiceover Man — refers to Ed Sheeran being the victor. Which suggests Ed was so far ahead in the vote during the recording that he was bound to win. Or something.

"That's it for this week," Anton says.

And apart from a bit of faffing while Pixie and Anton's song plays in the back­ground, that is indeed 'it for this week'.

Next week's hosts are — you're probably one step ahead of us here — The Vamps. 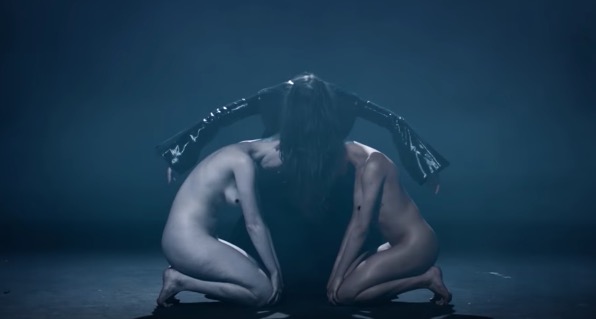