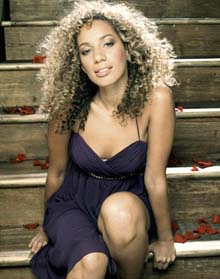 1. It's called 'Bleeding Love' and it generally bleeding good.

2. It's not about having sex with someone while they've 'got the painters in'.

3. After a year in America Leona Lewis now does not sound like Leona Lewis very much. She has learned to do the stran­gu­lated yodel of Celine Dion with some of Mariah's squeaks.

4. It’s very much like a 'first single Mariah Carey' single in that it is not a ballad in spite of the fact that you can be sure a sig­ni­fic­ant pro­por­tion of the album will be about 0bpm.

6. She can still sing quite well.

7. Bleeding love still seems like a rather gruesome sentiment. Especially the bit about being cut open and all the mentions of veins. At least Leona can work as a butcher if this all goes wrong.

8. It's memorable from the first listen although the lyrics are a bit 'nutter on the bus' so don't sing them in public.

9. We're still not 100% convinced that this single is totally world changing but if we had not been assured that Leona Lewis was going to be the biggest star on the planet for the past nine months our expect­a­tions might have been a little lower.

10. On the other hand it is without question the best single anyone from the X‑Factor has ever released. This may all change when Chico releases his new single, though, obviously.

Someone has taped it off the radio and put it on Youtube. Listen to it here.

But whatever you do, do not listen to it here.

It's still not 'Early Winter'

Are Xenomania putting together the greatest girlgroup of all time?