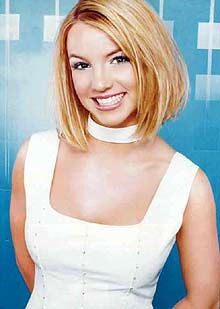 2. That is if you hoped it would sound like 'Slave 4 U' crossed with Nelly Furtado's 'Maneater'. It is thor­oughly amazing.

3. 'Gimme More' does go rapidly downhill after the opening line. However,
since "it's Britney, bitch" is the single greatest opening line in the
history of music it would be difficult for the song to maintain that level of excite­ment throughout.

4. It is a proper song with all the bits in the right places unlike, for instance, 'Do Somethin', which was a bit of a strange one really.

5. It's nothing like that strange little ballad you might have already heard where she has a phone con­ver­sa­tion with nobody.

6. There are some talky phone bits on this though but they are good and when she does a laugh near the start of the song she sounds genuinely happy and Britney being happy makes us very happy too.

7. The topics discussed in the lyrics include Britney Spears being Britney Spears and going around doing the things Britney Spears likes to do which mainly involve going out for the night, being quite popular and having the people nearby quite inter­ested to see what she is up to.

8. It proves our amazing Britney Off The Rails Theory to be 100% correct.

10. Fingers crossed for a sex change and the ampu­ta­tion of all limbs prior to the release of her next album, eh viewers?