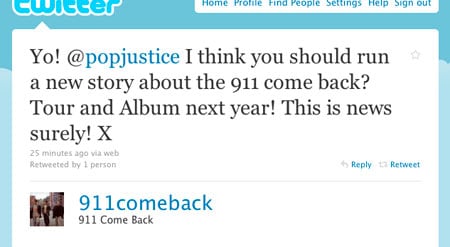 For younger readers: 911 were an aston­ish­ing trio of middle aged dwarves who enjoyed a string of hits in the 1990s but made the schoolboy error of releasing a covers album without covering '911 Is A Joke', which would have been appro­pri­ate con­sid­er­ing the were, frankly, even worse than Boyzone. Searching for the band on Google images is a slightly harrowing exper­i­ence but 'Party People… Friday Night' remains a solid gold classic.

Mini Viva's 'One Touch': the video has arrived