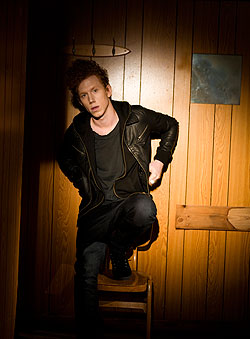 As you know, we are fans of Erik Hassle and his album 'Pieces'.

The first proper single is still not out yet, which is just as well as the Starsmith remix has just appeared and is the version you will hear on the radio.

Starsmith's version is not the usual sort of Starsmith remix. It's basically a bit of a re-edit with some magic pop dust sprinked on top.

To start off, here's the old version. This is the version that was a hit in Sweden etc etc.

If you're thinking 'hang on, they're almost the same', think about how you would behave if you were entering your dog in a dog show, and think about how many times you'd brush its hair before you put it before the judging panel. It's basically the same thing. It's also a bit like wearing a really nice jumper and then going, 'do you know what? This jumper is brilliant but it would look even better if I was wearing AN AMAZING HAT', then putting on an amazing hat.

A little insight into the world of A&R there, readers. Use that knowledge wisely.

The Newsdump, Jan 8 2010: from Bowie's note to Goulding topping the vote