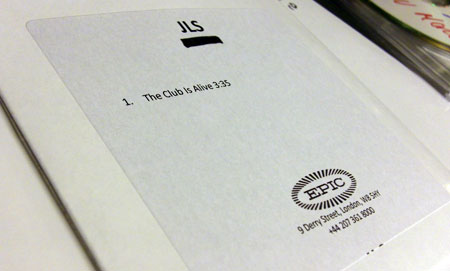 About a year ago the Epic Records bigwig partly respons­ible many centuries ago for Another Level and Blue got very excited in front of us.

Having signed JLS — another British boyband whose logo was destined to be tattooed across the face of Capital FM's entire audience — he was ready to launch the band and had two tracks to play us. He played 'Everybody In Love' and 'Beat Again', they were very good, we left the building with an amazing blue JLS hoodie, the rest was a sig­ni­fic­ant footnote in boyband history, and now here we are.

Or, rather, there we both were again yesterday for round two. He is the sort of label boss who gets terribly animated about his artists and when he's pitching you his next move he very excitedly tells lots of stories and does voices and gets up and waves his arms around a lot. Yesterday he gave us a very good per­form­ance regarding JLS' new single, 'The Club Is Alive'. As it turned out, the track lived up to 'the chat'.

The song is based on an idea by v good songsmith Savan Kotecha; Steve Mac and Andrew Frampton are also on board. The idea is that the chorus takes Rodgers & Hammerstein's 'The Sound Of Music' (NO WAIT COME BACK) but has the boys singing "the club is alive with the sound of music". It's a terrible idea executed bril­liantly. Maybe it's a brilliant idea executed bril­liantly — to be honest it doesn't really sound anything like the original 'Sound Of Music' tune but it's enough of a talking point to make the single feel like something of an event and a step up for the band which, con­sid­er­ing 'One Shot' is still all over the place, is probably quite fortunate. It sounds big. Actually it sounds massive: there are some per­func­tory lyrics about "shawties all around", "out with my boys", "I can be the DJ you can be the dance­floor you can get up on me" (you've heard all this a million times before) but the song's secret weapon is its mental pro­duc­tion, pile­driv­ing beats and more than a slight hint of the kitchen sink.

'The Club Is Alive' is basically JLS doing Black Eyed Peas — it sounds like an inter­na­tional Number One rather than just a UK one and imme­di­ately drags JLS' musical output up to the level of their current profile. Over the last few months the band's success has begun to exceed the quality of their debut album, some of which was really quite duff, and 'The Club Is Alive' restores equi­lib­rium. Certain showbiz colum­nists might even describe the track as 'JLS club heaven' but something that cheesy would never even cross our minds.

In other news the band have recorded a handful of other tracks for the new album (Calvin Harris is among the col­lab­or­at­ors — incred­ible) and will continue recording over the summer. The plan is that 'The Club Is Alive' comes out pretty soon (the radio premiere is imminent), the band continue promoting in the States during the summer months while also playing shows in the UK, then there's another new single in the autumn before the second UK album drops at the end of November.

We'll finish with a pop fact: appar­ently Justin Bieber wanted to record 'One Shot' but JLS got it instead. Amazing.

Something for the weekend? How about a listen to Scissor Sisters' monumental new single