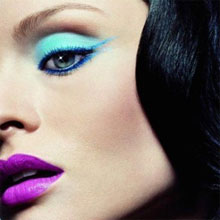 Throw your iPod out of the window, delete everything in your computer's iTunes library and set fire to any remaining CDs, records and tapes: there is only one song you will need between now and the end of 2009.

1. It's the new Freemasons single.

3. This is a bit com­plic­ated so pay attention: it's a song Sophie did with the Freemasons and Biff, and it was going to be a Sophie single (and she put one version on her MySpace), but then Real Life took over (by real life we mean babies and makeup advert­ise­ments) so now it's going to be a Freemasons single — coming out through their label, rather than Sophie's — featuring Sophie as the guest vocalist.

4. That wasn't actually par­tic­u­larly com­plic­ated, was it.

5. The version that is today's Song Of The Day — with the massive one minute breakdown, strings all over the show and so on — redefines any concept we may pre­vi­ously have had of 'poppers o'clock' and was debuted by The Freemasons over the weekend when they played at Syndey Mardi Gras. Apparently the Freemasons are still having a little bit of a fiddle with it but as things currently stand the club mix is nine minutes and 18 seconds long. (Amazing.)

6. If you are thinking of listening to the clip on the Song Of The Day page we suggest you sit down or hold on to something, and would also advise against listening if you have any sort of history of heart problems. IT IS QUITE EXCITING. (ie It's got a whooshy noise in it.)

7. It does, of course, sound like quite a few other Freemasons tracks and mixes. In some sort of parallel World Of Wrong this might be seen as a bad thing: on Planet Popjustice it means we've got a track which sounds like EVERY AMAZING FREEMASONS SONG EVER. It's like a greatest hits album all in one song. 'Beautiful Liar'. 'Ring The Alarm'. 'Uninvited'. 'Some Of The Others Ones'. ALL IN ONE GO.

8. So anyway, it's out in probably a few months or something.

9. We suppose the idea would probably be for Sophie to have her vocals on a massive crossover club record and then, with the wind behind her, to launch her pop career off the back of it. Can't see that working etc etc etc.

What's the one thing worse than Duffy's Diet Coke ad?