Some of the Popjustice forum regulars are slightly concerned that the iTunes Music Store has suddenly started censoring song titles. Like so: 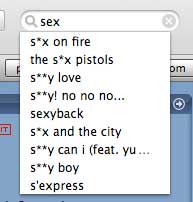 As well as fun words like 'sex' and 'penis', the iTunes Music Store is also censoring words like 'hot' and 'bum'.

'Lesbian' is also classed by iTunes as explicit but 'gay' is appar­ently alright.

It's hard to really see the rationale behind all this is but we have 'fired off' an email to Apple's press office who we're sure will explain everything when they've finished their lunch.

We should have pitched this to the Guardian or something, really. All you'd need for a 'news story' is a quote from the editor of Diva or some other such lezmag about how "this clearly dis­crim­in­ates against lesbians". Maybe you could phone up that numpty at Mediawatch for some reac­tion­ary quote about how the cen­sor­ship hasn't actually gone far enough and you'd have an instant storm in a teacup.

We're not really that bothered about the cen­sor­ship, really, although it's clearly ridicuious — the most annoying thing is that it just looks stupid when you're trying to buy music.

Note to anybody using our diagonal background on their own site