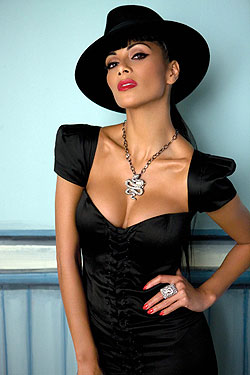 It is tempting to think of Nicole Scherzinger (pictured right — don't look at her boobs that's exactly what she wants you to do) and her single 'Poison' as one of last year's most amazing pop surprises, although the fact that it was amazing should not have been sur­pris­ing at all because after the whole 'Her Name Is Nicole' 'debacle' it is not as if Polydor were exactly going to release a new Nicole solo single unless it was really quite listen­able and hitworthy.

For the follow-up Nicole has taken the con­tro­ver­sial move of recording a song that is also basically brilliant.

It is produced by Dave Aude, it's out in the UK on March 6 and it is called 'Don't Hold Your Breath'.

You may well have heard the demo which features another singer and has been flying around all over the place for the last few days. If you have heard it you will already be aware of the following points:

1. It sounds all fizzy and half-danceable and is a cracking "I've had enough of all this, I am a strong woman and I'm off"-type pop tune. It includes lines like "it took all the strengh I had but I crawled up on my feet again" and "I
loved you so much that I thought some day that you could change", with a
big old chorus of "you can't touch me now, there's no feeling left. If
you thinking I'm coming back don't hold your breath".

2. It is a proper romantic singsong sort of 'song' song rather than some techno nonsense with a load of old shouting about a) being brilliant, b) having a dance in a nitespot or c) being brilliant and having a dance in a nitespot. It is nice to have a decent song about love because love is the official topic of pop and anyone who tries to tell you otherwise is a fool to them­selves and needs to have a long sit down.

3.
Fans of the metaphor will be cheered by the middle eight which includes
the lines "jumped off a train running off the track" AND "a bad movie
ends and the screen fades to black". We prefer the second one and we
don't really think Nicole jumping off a moving train is a very good
idea.

"Well that is the demo," you are probably thinking. "Since the events of Holditagainstmegate pre­sum­ably we can now expect a ludicrous dubstep interlude to have been inserted." Well, we all now know that the dif­fer­ences between an early version of a song (not intended, for good reasons, for public con­sump­tion) and the final proper single version can be pretty radical, but all told 'Don't Hold Your Breath' isn't a very extreme example of this.

The song is identical in structure, lyrics and so on, it's just that everyhing is a little bit better and Nicole's vocal is far stronger.

Allow us to illus­trate in giftular form. 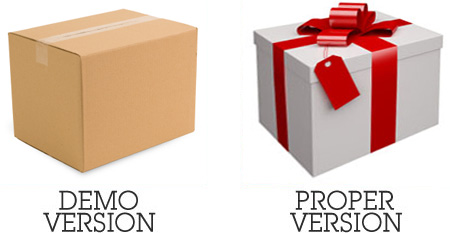 Differences are really very minor — the finished version starts with a filtery beaty noise, after the first chorus the demo has more of a droppy out bit, and when it comes to the first post-chorus part the breathy bits are far lower in the mix and there's a lovely string
section element. One thing that's the same as the demo is the fact that the end of the breakdown is really let down by the absence of Nicole letting rip with an earsplit­ting "DON'T HOLD YOUR BREATH!" prior to the track crashing into its final
victory lap. It's a minor quibble though when you take into account how infec­tiously brilliant the song is.

Anyway the Nicole album's also due in March and we're as excited about this as we are about the Britney album, but don't tell any of the Britney men­tal­ists on Twitter or they'll start moaning again. Then again, Britney men­tal­ists are always moaning about something so perhaps it's best if we at least direct what it is they moan about, a bit like those con­trolled explo­sions you sometimes see on the news.

Alesha Dixon feat Jay Sean — Every Little Part Of Me