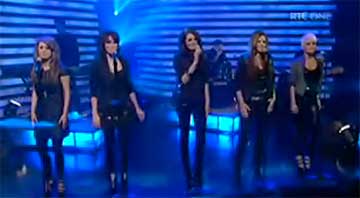 Ready for a new Louis Walsh act? It doesn't matter — you're getting one anyway. Louis hasn't ever really had much success with women…

…but in 2009 this lot have better prospects than Stephen Gately's one-time girl­friend (marketing genius) Kerri Ann or — the only girlgrop ever to be named after an STD — Bellefire.

The band includes ex-Girl Thing singer Jodi Albert. It's quite funny actually because Louis is co-managing the band with Kian from Westlife, and you see Kian is engaged to Jodi Albert. They must have laughed when they both got home that night.

The band have been out and about in Ireland recently and a few days ago went on The Late Late show to perform a song. You can watch the clip here. The song's called 'When The Stars Go Blue' and is about dead celebrit­ies. (NB: It's not about that at all.)

They're not actually called The Fridays, by the way. They don't even have a name yet, but The Saturdays has worked quite well and The Sundays is already taken, and by being a day earlier than The Saturdays The Fridays would have a definite 24 hour advantage. Seriously, it makes perfect sense — if they ever went head to head with The Saturdays in a chart battle they'd get an extra day's sales.

Have you got a better idea for this amazing (TBC) new girlgroup's name? Email them to us at [email protected] and we'll forward the whole lot onto Louis' office. We are sure he will take every sug­ges­tion very seriously indeed.

Tinchy Stryder — 'Take Me Back'