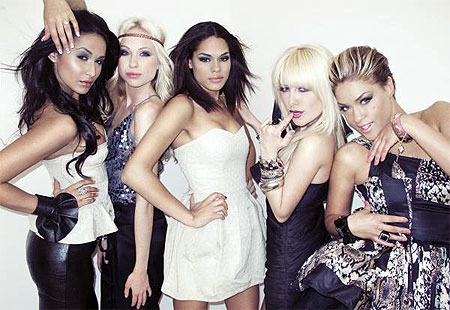 The Popjustice forum has been a good place to keep track of new RedOne-produced Swedish girlband Love Generation.

In March a thread was started explain­ing that RedOne (of 'some of the greatest pop songs of the last three years, plus the new Enrique one' fame) was knocking together a Swedish girlband and looking for members; later in March they started to get some press. We should probably have mentioned something about them at that point but as you can tell from tweets like this we're terribly busy.

The long and short of all this is that their first single is called 'Love Generation' (hence the name etc) and it's doing the rounds now and it is SOLID GOLD POP GENIUS.

[youtube]Ql7-zgZ6usY[/youtube]Here the band are dressed as 'Can't Speak French'-era Girls Aloud (and what an era that was) singing the song on a stage with some pyro­tech­nics etc. [youtube]8Pa9DTAqPgA[/youtube]We know that it is good to have another girlgroup capable of releasing brilliant songs but while you are listening to it there is a little sound at the back of your head, and it is the sound of a mumbling magical gnome in a parrot outfit, and if you lean down to listen to what he is saying he will whisper into your ear in tones so soft they're barely audible, "you know this isn't where she is cre­at­ively at the moment, but if Lady Gaga encored with this song on the Monster Ball tour the place would go fucking beserk". Which strikes you as a bit odd, because gnomes tra­di­tion­ally don't swear.

Locnville — 'Sun In My Pocket'