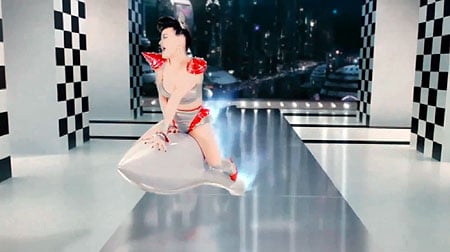 1. Loads Of Cash
We've been thinking about this since the start of the month when we saw the altern­at­ive video (except not really a video) for Katy Perry's 'Teenage Dream', which was filmed to promote a German TV station.

[youtube]7WfC2rd9bHo[/youtube] Obviously, it's the sort of thing that would never have existed were it not for Loads Of Cash. Some of the best pop comes from penniless frus­tra­tion and some of the best pop culture is the result of mavericks working to a tiny budget but, let's face it, when you want Katy Perry on a rocket or as a space-age Marilyn, Loads Of Cash is the only way forward.
More cash

2. Rihanna
One of the things we are loving most about Rihanna's new output — from 'Only Girl (In The World)' to that odd Doritos advert (another instance of Loads Of Cash being put to good use) — is how it is a massive two fingers to the legions of Rihanna pseudo­fans who jumped on the 'Rated R' bandwagon in the belief that she had become one of 'their' artists. To these people 'Umbrella', 'SOS', 'Pon De Replay', 'Take A Bow' and the rest were somehow not good enough, but chuck in some leather and swear words and appar­ently Rihanna was finally 'an artiste'. Well, 'Only Girl' and 'Who's That Chick?' both conjure the tri­umphant feel of Rihanna saying, "so you liked the supposed dubstep influence, did you? The mono­chrome artwork, the 'rock look'? Well I've finished playing with your toys now and you're welcome to them — I'm off". Clearly, flipping back in the direction of (sup­posedly) Stupid Pop is a far more rebel­li­ous act than anything in the 'Rated R' campaign.
More Rihanna

4. The Saturdays
We have basically decided that we are going to pretend the second album and last single did not happen. We will simply refuse to acknow­ledge that they existed. Hang on — which second album and last single? EXACTLY. So as far as we are concerned, 'Higher' (feat or not feat Flo Rida, he doesn't really bring much to the party apart from a sort of 'school register' vibe at the start) is the first single from The Saturdays' second album. And if you too manage to convince yourselves that 'Higher' really is the first Saturdays single since 'Work', you will find that you instantly feel happier about life, love and the state of pop. Try it.
More Saturdays

5. Tinie Tempah
The album, like most albums, is a little hit and miss, but the hit bits are MASSIVE AND AMAZING.
More Tinie Tempah

666. 'Simply Red'
Wherever we look at the moment we seem to find Mick Hucknall's stupid fucking face. Thanks but no thanks, 'Hucko'.
More 'Simply Red'