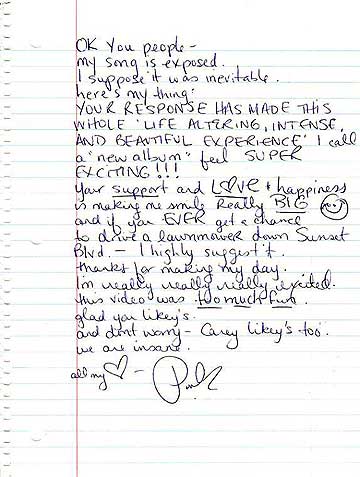 Yesterday, Pink posted the above note on her MySpace page as a response to the fact that her ACTUALLY LITERALLY BRILLIANT comeback single 'So What' has leaked on the internet.

From her hand­writ­ing we can deduce that:

2. Pink has blonde hair, but sometimes it is other colours, like brown or pink.

3. Pink has achieved a high level of success over the last few years with hits including 'Family Portrait' and 'U + Ur Hand'.

It is funny how much you can tell about someone from their handwriting.

If you haven't heard the single yet it really is very, very incredible.

One of the things we like about it is that while it's super­fi­cially a howl of defiance you can't escape the fact that at the heart of this is an injured and self destruct­ive spirit coping very badly but in the only way she knows how. 10/10.