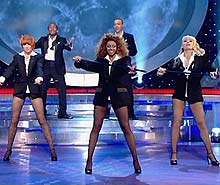 There is a new pop group around so we might as well tell you about them. They are called Dance X Winners.

They are the winners of Dance X. Dance X, you may have noticed, has been on BBC1 every Saturday for the last few months. It was one of the most deriv­at­ive, com­plic­ated and ill-conceived primetime 'reality' shows of all time, a fact no doubt recog­nised by the UK's major labels who all seem to have passed on the chance to release the winners' single. It has instead fallen to Gut Records to release the track, 'Dancing In Repeat', which is out now to download and available in the shops from next week.

Here's a clip of it.

[audio:dancexwinners.mp3]
Will this be the first reality pop debut to miss the Top 5? Let's look at the evidence.

1. The single is basically quite lame, sounding vocally and sonically like the theme from Fame Academy.

2. The band don't even have a name yet, sug­gest­ing the same level of com­mit­ment one might throw at the purchase of a new goldfish — "let's not give it a name for the first few days, it might be floating by the weekend".

3. The all-singing all-dancing pop group format hasn't worked at all in recent years and neither Dance X Winners or 'Dancing In Repeat' are powerful enough to reverse that trend.

4. What with it being a BBC show, Dance X couldn't promote the (com­mer­cial) release of 'Dancing In Repeat', meaning that nobody really knows it's out.

It's all a bit of a shame for the five singers/dancers who make up Dance X Winners, but life goes on…

Doesn't have to, but inevitably does