Amazingly, this has appeared on Britney's official site. 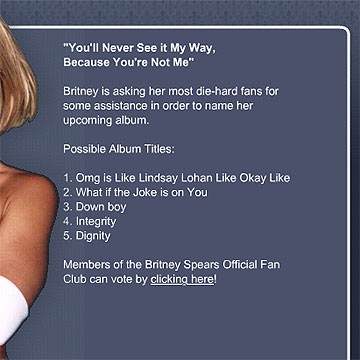 Out favour­ites are 'Members Of The Britney Spears Official Fan' and 'Club Can Vote By Clicking Here!'. Regarding the latter we don't think there is a precedent for under­lin­ing being an integral part of an album title. Certainly not in con­junc­tion with an exclam­a­tion mark

» 'Has Anybody Seen My Bag LOL'

That wasn't as funny as we thought it was going to be.