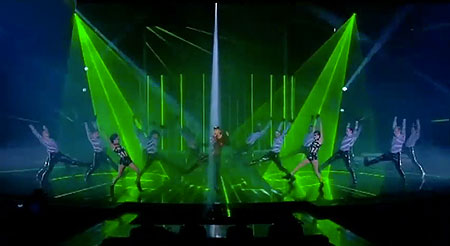 The YouTube video at the end of this post may no longer be active by the time you read this, but that matters little. What matters lots is that Nicole Scherzinger's per­form­ance of 'Poison' on last night's The X Factor will live on — Upon The Twitter, then through folklore, then in the laughter of children born to future gen­er­a­tions — for millennia to come.

(It was basically quite good.)

The epoch-rede­fin­ing per­form­ance featured LASERS and DANCERS and DANCE BREAKS and NICOLE BEING HELD ALOFT and A COSTUME CHANGE and VARIOUS OTHER MOMENTS OF GREATNESS.

As we pondered out loud yesterday evening, imagine if Top Of The Pops came back with the ability to pull off this sort of per­form­ance. It would also have to be able to accom­mod­ate a more scaled down per­form­ance such as Pixie Lott's usual trick of wheeling out three bored looking session musicians a few dancers seemingly dragged forward in time from 1999, but it would def­in­itely be rather watchable. All it would need, in order to be able to work in this post‑X Factor climate, is some sort of extra 'narrative' in which singers compete against each other week after week in order to… Hang on. Hang on just a minute. THAT'S THE TOP FORTY!

Anyway here is (or here isn't depending on whether it has been removed from YouTube) the per­form­ance. HOLD ON TO YOUR HAT.