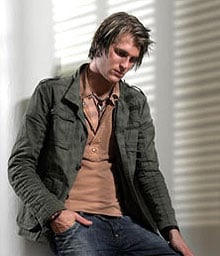 It's usually difficult to be sub­ject­ive on the topic of 'good' and 'bad' music. But just as records sometimes come along and are totally unar­gu­ably brilliant (you'd have a hard time finding someone capable of legit­im­ately artic­u­lat­ing the lack of worth in, say, 'Rehab' or 'Umbrella'), there are also songs which exist as working defin­i­tions of  'this is shit'. Basshunter's next single, 'Please Don't Go', is an example of the latter.

Contrary to pictorial evidence in certain parts of the internet, Basshunter has been a difficult chap for people to get their heads around. His first UK single, 'Now You're Gone', was not exactly to everybody's tastes, but it was easy to under­stand that a lot of the criticism thrown its way was based on gen­er­a­tional and geo­graph­ical dif­fer­ences. A 34-year-old in London, for example, would not really be able to approach the song with the same mindset as an 18-year-old in Stockport. (Even if, in the case of radio pro­gram­mers, that's exactly what their job is supposed to involve.) But with 'Please Don't Go' you could be a two month old child living in a village so remote that the concept of recorded sound was regarded as The Work Of The Dark Forces and you'd be able to identify it as entirely bereft of merit. It would be the first music you ever heard, and you would still know it was worse than all other music.

1. Yes it is a cover of the song most recently in the charts thanks to KWS.

2. Yes it sounds like 'Now You're Gone' but with all the fun and sponteneity reduced to a joyless and work­man­like attempt to quickly — so very, very quickly — cap­it­al­ise on its predecessor's success.

On the Popjustice forums, Acerben — a chap who knows his stuff on this sort of thing — says it's a "big mistake". Regardless of whether 'Please Don't Go' sells well or sells badly, we think he's right. You could argue that Basshunter didn't exactly have a repu­ta­tion as an artistic visionary pushing forward the bound­ar­ies of pop but he did manage to score a huge Number One single with an original song, in spite of very little tra­di­tional media support. It was a song whose success was based on people abso­lutely loving the track, rather than on perceived notions of cred­ib­il­ity. Of course, that earned the song a different sort of cred­ib­il­ity, which is being thrown away by 'Please Don't Go'.

Our ears our ears etc.

Sia — 'The Girl You Lost To Cocaine'