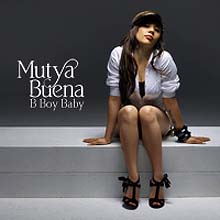 Things have not exactly gone to plan for Mutya – unless of course the plan was to release a series of increas­ingly unpopular singles over the course of 2007.

'Just A Little Bit' is currently selling slightly fewer copies than 'Patience' by Take That, sitting pretty at Number 65 in this week's singles chart.

It was going to take something very special indeed to stop 'Song For Mutya' getting to Number One earlier in the year but the unspeak­ably lacklustre video accom­plished that with ease and, to be honest, 'Just A Little Bit' is not likely to be counted among the greatest singles of 2007.

Neither is 'B‑Boy Baby', but at least a bit more effort has been put into the whole 'package' for this rush-released Christmas single. These efforts include:

» Releasing a single with Amy Winehouse on it.

»
Photoshopping that enormous tattoo off her leg on the front cover.

»
Getting Soulwax and Desert Eagle Discs to remix it.

Putting her 'Fast Car' cover on the b‑side would have helped matters too, but she has not done that.

What a load of old wank