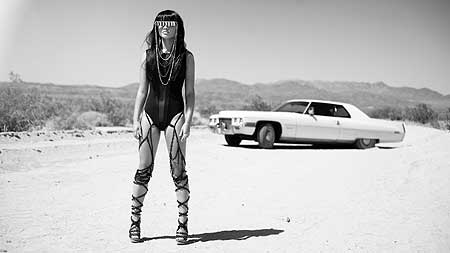 You are probably wondering what is happening with Natalia Kills' UK 'launch'.

Well, this has just arrived from The Label.

‘Mirrors’ is a powerful intro­duc­tion to the intriguingly dark pop of Natalia Kills. As atmo­spheric as it is catchy, watch the suitably edgy ‘Mirrors’ video here.

Born in Bradford 24 years ago to Uruguayan and Jamaican parents, Natalia moved to L.A. in 2008 and was signed the same year by Will.i.am in a joint part­ner­ship with Interscope and Cherrytree Records (Lady Gaga, La Roux). Tipped by Perez Hilton, who booked her for his One Night In Jersey gig in Atlantic City, and Popjustice, who touted her as “Pop’s next superstar” and whose readers voted Natalia No.2 in the ‘New Act Most Likely To Save Pop (Not That It Needs Saving) in 2011’ category in the 2010 Popjustice Readers Poll. Natalia Kills debut album ‘Perfectionist’ will be released later his year.

Taking visual and musical ref­er­ences from Bladerunner, Mad Max and power pop ‘80s acts like Depeche Mode, Kate Bush, The Eurythmics and Queen, Natalia Kills twists these influ­ences into something new and original, deliv­er­ing a 360° narrative that can be seen in her videos, pho­toshoots, artwork and fashion, and through­out her film-noir style self-made webisode series ‘Love, Kills.’

So that's that, and here's the video for 'Mirrors' which we didn't post when it first went online because in all honesty we didn't think it was much cop but the song's good and at the end of the day readers that is what really matters. Once again, music is the real winner.

Let's be honest, the new Rihanna single is shit and so is the video.

The Sounds — 'Something To Die For'