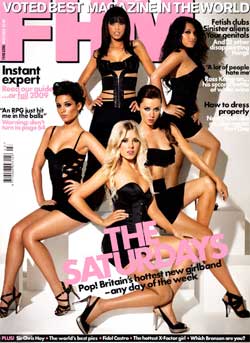 1. Marina
We're going to do a seperate thing about her later today (we just can't help following Perez's tips!!!) so watch this space.

2. The Diamonds
We like the fact that Marina (see above) has a made-up backing band who don't really exist. Although what this whole situation does for the sanity of people who do actually perform on stage with Marina may only become evident years from now. Musicians can be terrible fragile people. They cry a lot.

3. The Saturdays (pictured)
Breaking the Girls Aloud / Sugababes duopoly was a huge achieve­ment and coups like the current FHM cover and the forth­com­ing Comic Relief single lay the found­a­tions for the band's second album to be utterly huge. Also we like the whole thing with Frankie and Dougie from McFly. When we first inter­viewed McFly about five years ago we asked Dougie which popstars he fancied and he said Frankie from S Club Juniors (he was 15 at the time so it was alright and not illegal). We're sorry if this seems crude, readers, but Dougie has literally been knocking them out over Frankie for HALF A DECADE. And now they are together. Love is a beautiful thing.

4. Pet Shop Boys
We are still listening to the new album QUITE A LOT INDEED.

5. Blackout Crew
To say that this lot divide opinion is something of an under­state­ment but society gets the boybands it deserves and Blackout Crew aren't going away in the forsee­able future… (Except perhaps on holiday.)

666. 'The Quigg'
Look, if you think Blackout Crew are bad, just consider the fact that there's going to be an Eoghan Quigg album out before the end of the year. 'Dialled' doesn't seem quite so bad now, does it?

The View's new single was just on the radio.