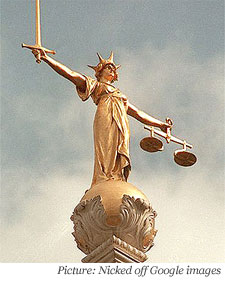 Right — it's Friday, this has been going on too long, let's give it until the end of the weekend to get this sorted out and by Monday we'll be able to move on to something else.

FIVE SOLUTIONS, ONE OF THEM'S BOUND TO WORK:

1. The 'broadband throt­tling' idea — basically reducing but not stopping internet access — proposed by the FAC is absolute shit on a stick because you can buy pay as you go broadband dongles from any high street and it's totally unen­for­cable. Inconvenience, however, may be the key. Offenders being forced to stand on one leg in order to use email is one solution.

2. Another method of pun­ish­ment-through-incon­veni­ence would be to give everybody chairs that are slightly too low for their desks, or to turn their computer monitors slightly sideways. It would also be a good idea to take all the keys off repeat offenders' keyboards then put them all back on in a different order.

3. One minute's community service for every one minute of illegally down­loaded music. Good upshot of this is that it could mean the end of 'the album interlude', because people aren't going to risk having to get up to their elbows in excrement in some mad old bat's back garden for the sake of 60 seconds of Eminem pre­tend­ing to have an argument with someone from his record label.

4. Interntional bell end register. An online document of all 'bell ends' who have down­loaded music illegally. Guilty parties will always offi­cially be 'a bell end', meaning they will never be able to win any arguments about anything.

5. For under 18s, 'the hat penalty'. If found guilty the teenager is forced to wear a hat. If the teenager enjoys wearing hats, they are banned from wearing hats. Youth 'tribes' come and go, change and shift all the time but teenagers can ALWAYS be split into those who enjoy wearing hats and those who don't. This idea is therefore easy to implement AND futureproof.

6. Proper death penalty, no messing around, if you've got an MP3 you're not supposed to have you get shot through the face twice by a proper killer or 'Andy McNab' or similar mad bastard.

We could go on but try those out first and if they don't work we'll give you some more ideas. CHEERS.