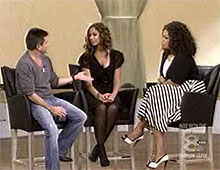 Leona Lewis performed 'Bleeding Love' live for the first time on US tele­vi­sion two days ago.

While he was on the show, Simon also paid off the $162,000 mortgage of two guests whose daughter is strug­gling with cancer, which has had the unex­pec­ted effect of splashing Oprah's show all over the media today.

Look how badly it's doing on US iTunes…