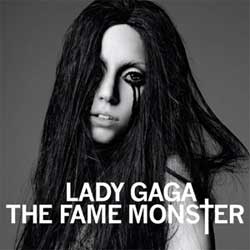 Right — so we've heard Lady Gaga's 'The Fame Monster' and it's a pretty aston­ish­ing piece of work. Lyrically, sonically, melod­ic­ally and con­cep­tu­ally it's right up there with its pre­de­cessor 'The Fame', with a definite feel of things moving in a new direction.

We know a lot of you are thinking that this is just a cash-in reissue of 'The Fame' with a few tracks chucked on. It's not that at all — this is a col­lec­tion of songs in its own right. When you buy this you will not be buying 'The Fame' again in order to get at a couple of extra songs — you'll be buying a new album which just so happens to have a copy of 'The Fame' in the same box.

Here's a track by track.

Waffle: 'Poker Face' rein­ven­ted. Can you believe that some people have said that this song sounds too much like 'Poker Face'? As if anything could sound  too much like one of the best songs of 2008/09? It would be like saying 'the problem with this res­taur­ant is that the food is too nice and too reas­on­ably priced', or 'the problem with this hat is that it makes me look too attract­ive'. Now imagine wearing an amazing hat in the world's best res­taur­ant. THAT IS WHAT THIS SONG IS LIKE.
Verdict: 7/8

And by 'this' we mean an amazing romantic post-Italotronic triumph.
Verdict: 7/8

'Monster'
Waffle: Opens with snatches of dialogue ('Don't call me Gaga', 'I've never seen one like that before', 'Don't look at me like that') then launches into a story of Gaga pulling a "wolf in disguise". The chorus is a big chant of "that boy is a monster, that boy is a monster" and there are some 'Just Dance'-isms along the way too. There's a great breakdown for the middle eight: "I wanna just dance but he took me home instead, uh-oh there was a monster in my bed, we French kissed on a subway train, he tore my clothes right off, he ate my heart and then he ate my brain".
Verdict: 6/8

'Speechless'
Waffle: At one point this was a big piano ballad but since Ron Fair's pro­duc­tion has been added it's more along the lines of a 'Starman' or an 'All The Young Dudes'-type affair. This is the track about Gaga's father and it seems to be written from Gaga's mother's point of view. By the time the second verse comes around there seem to be strong hints of booze ("I can't believe how you looked at me with your Johnnie Walker eyes", "raise a glass to mend all the broken hearts" etc) so it seems this is the 'Fear Of Alcohol Monster' Gaga pre­vi­ously mentioned. The chorus is "I'll never talk again, oh boy you've left me speech­less / I'll never love again, oh friend you've left me speech­less" and one of the best bits finds Gaga singing "after all the boys and the girls that we've been through, would you give it all up if I promised boy to you that I'll never talk again, and I'll never love again, I'll never write a song, or even sing along…" This is a massive, massive ballad which doesn't sound like anything
else you've heard from Lady Gaga and could do for her what 'Beautiful'
did for Christina Aguilera. At the very least, it's a good
lighters-aloft live anthem.
Verdict: 7/8

'Dance In The Dark'
Waffle: The chorus to this is amazing — imagine RedOne to the next level with a massive emo­tion­ally-charged synth riff chucked in along the way. Actually the everything to this is amazing, it opens with the words  "silicone, saline, poison, inject me" and the arms-aloft, four-to-the-floor chorus is a chant of  "baby loves to dance in the dark, cos when he's looking she falls apart." There's another line about "she looks good but her boyfriend says she's a tramp" — it seems to be about women who are mar­gin­al­ised or who are in (mentally?) abusive rela­tion­ships. We may have totally missed the point of this song, and if so 'apols' in advance.
Best bit: an almost pant-wettingly excellent, 'Vogue'-style rap breakdown in which Gaga lets rip: "Marilyn, Judy, Sylvia, tell them how you feel girls [something we couldn't quite make out] hot like Liberace, find your freedom in the music, find your Jesus, find your cutie, you will never fall apart Diana, you're still in our hearts, never let you fall apart, together we'll dance in the dark". AMAZING.
Verdict: 8/8

Waffle: A song about being pestered by someone on the phone when you're trying to have a dance in a nitespot. It's a little bit like Gwen's 'What You Waiting For?' meets Timbaland's 'The Way I Are' meets about fifty other things. "I cannot text you with a drink in my hand," Gaga notes at one point. The structure's quite exciting: quiet harpy intro / "kinda busy, k‑kinda busy" bridge as beat kicks in / verse / chorus ("stop calling, stop calling, I don't wanna talk any more") / post­chorus bit / 'The Way I Are'-style rap / Beyonce rap ("should have left my phone at home cos this is a disaster") / breakdown verse / "kinda busy" bridge / chorus / another bit / 'The Way I Are' rap bit / extra 'My Humps'-esque (but not really) "my telephone! My telephone!" outro, then "we're sorry, the number you have reached is not in service" operator message. We love Beyonce insisting that some bellend on the other end of the phone won't make her get her coat any faster. Bonus fact: The guest vocalist on this was going to be someone else, but then the guest vocalist wanted to put the song on her own greatest hits album, so Lady Gaga made altern­at­ive arrangements.
Verdict: 7/8

'Teeth'
Waffle: A wobbly, stompy, bouncy marching song. Opens with a "don't want no money, just want your sex" line, includes lots of chanting of "SHOW ME YOUR TEETH! SHOW ME YOUR TEETH!", and a foray into Black Betty territory
Verdict: 6/8

That's all from one listen — this album has loads more to give up from repeated plays and we can't wait to get stuck in properly. 'Monster' and 'Bad Romance' have elements of 'Just Dance' and 'Poker Face' but these seem like knowing nods back in the direction of 'The Fame', while other songs — 'Dance In The Dark', 'Teeth' hint at what lies ahead for the next, third Lady Gaga album.